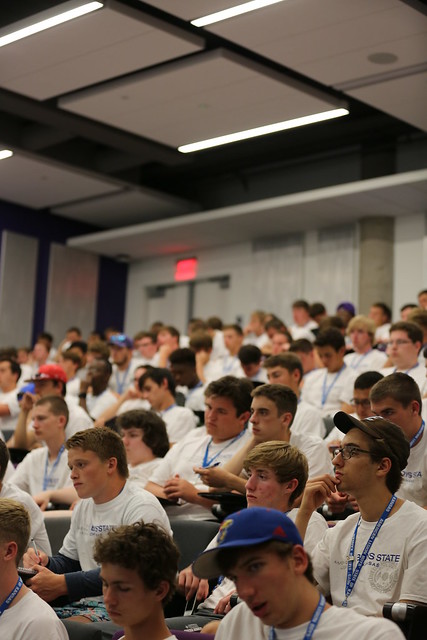 There were three speakers during the town hall meeting:the Honorable Judge Joseph Perrone Jr., Dr. Bernard Franklin, and Representative Dr. Brandon Whipple. Judge Perrone spoke on how and why our judicial branch is so powerful compared to other judicial branches in the world. He discussed two cases. The first was about three Libertarians in Georgia who were opposed to having to take drug tests. The case was taken before the Supreme Court and they ruled in favor of the Libertarians. The second case, from Indianapolis, involved Two lawyers were running late for a meeting and were stopped to search for drugs in the car. They eventually took their case to the Supreme Court and they ruled in their favor. Dr. Franklin was was a very charismatic speaker, whose message focused on our futures and the idea that we are meant to be leaders. He repeated the phrase, “The world is changing around you.” He meant that since the world is going through a social and technological metamorphosis, we should not get left behind. He also touched on his idea of how to achieve your goals. He said, “Stop being boyish, and man up, take charge of the role you were given.” The third speaker, Dr. Whipple, spoke of the ongoings of the Kansas House of Representatives. He briefly spoke about his career, but his main point was about leadership. He spoke of three kinds of leadership: Transformational, Transactional, and Laissez Faire. He also spoke on what makes a leader. ]]>